350.00  €
The Canal du Midi by bike in 4 days and 3 nights in a standard or comfort hotel. Discovery of Castelnaudary and the medieval city of Carcassonne.
I reserve !

Midi canal from Toulouse to Carcassonne

410.00  €
Discover the Canal des 2 Mers by bike in 5 days and 4 nights in a standard or comfort hotel between Toulouse and the medieval city of Carcassonne.
I reserve !

440.00  €
5-day, 4-night bike trip in a hotel on the Canal du Midi between Castelnaudary and Narbonne in standard or comfort version.
I reserve !

Midi canal from Toulouse to the sea

620.00  €
The Canal des 2 Mers by bike in 7 days and 6 nights in a standard or comfort hotel between Toulouse and Narbonne, passing through the medieval city of Carcassonne.
I reserve !

Traveling by bike along the Canal du Midi 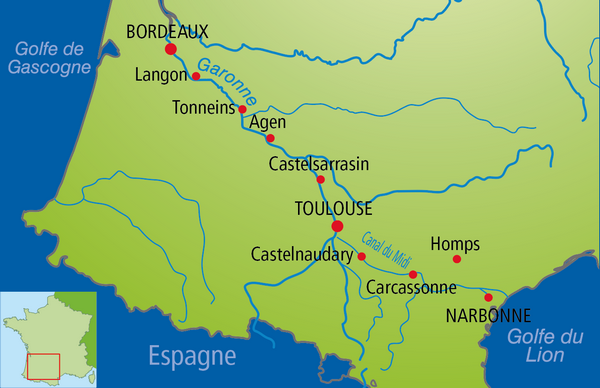 Our experience on the Canal du Midi

Our first bike trips on the Canal du Midi date from 1995 - A cycle route in the shade of the trees along a refreshing canal. The canal crosses the heart of cities, creating a secure environment, ideal for children. It is also a track that is far from perfect and is tough for bikes and even more for their tires. !

Since 1996, the Canal du Midi has been listed as a UNESCO World Heritage Site. Considered as the largest work of the 17th century by its contemporaries, the canal is today only used for tourist purposes.

Bordered by plane trees, it is pleasant to cycle, but some portions are in poor condition and we would like to warn our customers about it. In addition to being a unique structure, the canal crosses towns and villages with remarkable charm and heritage.
Narbonne and Castelnaudary are stages or crossing points of this route with Southwestern accents. The formidable medieval city of Carcassonne, listed as World Heritage by UNESCO is an exceptional stopover.

The Two Seas Canal by bike

The Canal du Midi constitutes with the Canal de la Garonne the Canal des 2 Mers. The Mediterranean Sea is connected to the Atlantic Ocean thanks to the two structures and the Brienne Canal which joins up with Toulouse. The Canal des 2 mers à vélo is known and recognized by cycle tourists. Economic players have adapted to cycling and the "bike welcome" label has become the norm in most hotels and accommodation. If you want to know more about this, see our page dedicated to the Canal des 2 Mers by bike.

Explore the canals by bike

Do you like cycling along the canals? We have many destinations to offer you!
- Burgundy by bike
- the Nantes to Brest Canal by bike

Finally, how can we not mention the Netherlands when we talk about canals? In addition to a high number of canals throughout the country, the cycle network is certainly the most developed in Europe!