279.00 €
3-day, 2-night cycling tour in hotel based in La Rochelle. Short stay on the Vélodyssée with discovery of the Ile de Ré.
I reserve !

The Vélodyssée, from La Rochelle to Rochefort

419.00 €
5 days and 4 nights cycling trip in hotel between La Rochelle and Rochefort. Discovery of the cycle paths of the Vélodyssée and the Île de Ré.
I reserve !

419.00 €
Bike trip in 4 days and 3 nights in a standard or comfort hotel. Discovery of the Vélodyssée, Île de Ré, Île d'Aix and Fort Boyard from La Rochelle.
I reserve !

Between Vélodyssée and Flow vélo, from La Rochelle to Cognac

559.00 €
Between sea and Cognac by bike in 6 days and 5 nights in a comfort or standard version hotel from La Rochelle on the Flow Vélo.
I reserve !

495.00 €
Cycling trip on the Vélo Francette between Niort and La Rochelle in 6 days and 5 nights in a standard and comfort hotel. Discovery of the Marais Poitevin and the Atlantic Coast.
I reserve !

669.00 €
Cycling trip in 6 days and 5 nights in hotel standard or comfort version. Online tour from Arçais in the Marais Poitevin to La Rochelle.
I reserve !

The Vélodyssée, from La Rochelle to Oléron isle

579.00 €
6 days and 5 nights cycling trip in a hotel between La Rochelle and Marennes on the Vélodyssée. Discovery of the islands of the Atlantic coast.
I reserve !

The Vélodyssée, from La Rochelle to Royan

739.00 €
The Atlantic coast by bike in 7 days and 6 nights in a hotel between La Rochelle and Royan. Explore the Vélodyssée and the most beautiful islands of the Atlantic.
I reserve !

From Marais Poitevin to Atlantic coast

849.00 €
8-day and 7-night bike trip in a hotel on the Francette bike and the Vélodyssée between Niort and Royan. Discover the Marais Poitevin, La Rochelle and île de Ré on the Atlantic coast.
I reserve !

From La Rochelle to Bordeaux

939.00 €
8 days and 7 nights cycling trip in 2 and 3 star hotels. Cycle along the most beautiful part of the Atlantic coast and visit La Rochelle and Bordeaux.
I reserve !

Vélodyssée, From Royan to Biarritz

Between Vélodyssée and Flow vélo

479.00 €
Between sea and Cognac by bike in 5 days and 4 nights in a comfort or standard version hotel from La Rochelle on the Flow Vélo.
I reserve !

729.00 €
Cycling trip along the Charente on the Flow Vélo between Angoulême and La Rochelle in 7 days and 6 nights in a hotel. Travel by the sea and in the land of Cognac.
I reserve !

Flow vélo, from Angoulême to Rochefort

539.00 €
Cycling trip along the Charente on the Flow Vélo between Angoulême and Rochefort in 6 days and 5 nights in a hotel. Stay by the sea and in the land of Cognac.
I reserve ! 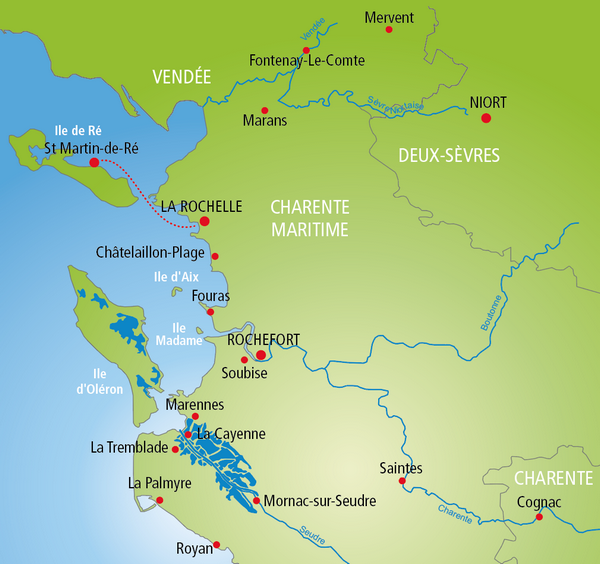 Between land and sea, the ideal place for bike rides and hikes

The unspoiled and slightly rugged coastline offers breathtaking views and a wide variety of landscapes within easy reach. La Rochelle, Rochefort and Royan, martitimes towns par excellence, guarantee you unforgettable stages where heritage and culture are at the rendezvous. Inland, the Marais Poitevin, east of La Rochelle, is calm and peaceful with its many canals and villages with unspoiled charm. In Charente, the river of the same name welcomes you with its beautiful Charente houses, its comic strip capital, Angoulême and its hidden corners. With a highly developed cycle network (greenways, towpaths, own cycle paths), you will be happy to cycle at your own pace and in complete safety.

3 major cycle routes pass in Charente-Maritime: The Vélodyssée, the Flow Vélo and the Vélo Francette

La Vélodyssée, the French part of EuroVelo 1 (>> find out more) stretches from the north of the department (Marans to Royan) along the Atlantic coast. Entirely signposted, this route is easy to follow and almost entirely on clean trails. It is the most frequented French cycling route, ahead of its “competitors” the Loire by bike, the ViaRhôna or the Mediterranean by bike.

>> All the circuits on the Vélodyssée

The Flow Vélo, which leaves from Thiviers in the Dordogne, recovers the Charente river at Angoulême and follows it to Fouras via Rochefort. It is a recent course which is signposted in both directions. Its small paths, towpaths and cycle paths in the heart of the countryside make it a very pleasant route to walk and still little used.

>> All the circuits on the Flow Vélo

The Vélo Francette is a national route that goes from Ouistreham (Normandy) - La Rochelle via the Marais Poitevin. If you love lush green countryside and quaint towns and villages, this itinerary is for you! The route was voted “best cycle route in Europe” in 2017 in the bicycle country, the Netherlands. Here too the markup is complete and we alternate between towpaths, cycle paths and secondary roads.

>> All the circuits on the Vélo Francette