439.00 €
The Netherlands by bike in 5 days and 4 nights in a 4* hotel to discover the polder landscapes south of Amsterdam, capital of Holland.
I reserve !

430.00 €
Cycling tour in the heart of the Netherlands from the charming city of Utrecht in 4 days and 3 nights. Discovery of typical Dutch landscapes.
I reserve !

605.00 €
The Netherlands by bike in 8 days and 7 nights in 3 or 4 star hotels in the Frisian country. Loop tour departing from Leeuwarden in northern Holland.
I reserve !

759.00 €
Discover the Netherlands by bike in 7 days and 6 nights in a hotel from Utrecht through exceptional landscapes of land and water.
I reserve !

999.00 €
Cycling trip and discovery of Amsterdam, the city of cycling, its canals and its region in 4 days and 3 nights.
I reserve !

The Netherlands by bike, the Ijssel and Giethoorn - 7 days

669.00 €
Cycling tour in Holland in 7 days and 6 nights in a hotel to discover Giethoorn in the Weerribben-Wieden National Park and along the Ijssel.
I reserve !

779.00 €
Cycling trip and discovery of Amsterdam, the city of cycling, its canals and its region in 4 days and 3 nights.
I reserve !

The Netherlands by bike 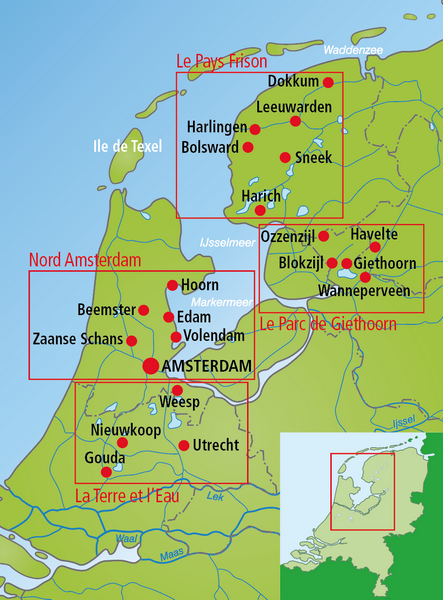 The Netherlands is an exceptional cycle tourism destination. Polders, mills, dikes, canals ... The country is marked by the management of the water level. And for good reason, it is a necessity since some places are below sea level!
The architecture and the particular cultural heritage also constitute an attractive attraction. If you leave in March-April you can also discover the magnificent fields of tulips in bloom.

Are you looking for a famous and unique destination for your cycling holiday? In the Netherlands you will find impeccable and uneven cycling routes and of course surprising landscapes.

Holland by bike and boat

You are here in the category of "classic" bike tours. The accommodations are traditional hotels. If you are interested in a bike and boat trip, go here. Sleep on a barge and cycle along the water during the day ... A formula that has already won over more than one touring cyclist!

Around Amsterdam by bike

Do you know the cycling capital of the world? To date, 400 km of cycle paths crisscross the city of Amsterdam. The bicycle is widely used as a means of transport. The abundance of canals contributes to the charm of the city.

You will be surprised by the impressive car parks at the exit of the station. You will find it in other cities in the Netherlands.

No problem to report to drive in the capital of the little queen!

We offer star tours around Amsterdam to discover villages such as Oudekerk on Amstel in the footsteps of the famous painter Rembrandt. You will have the pleasure of driving in Haarlem, a city that has kept the traces of previous centuries.

The Friesian Country, in the north of the Netherlands by bike

You enter the Polders region and enjoy the view of several lakes. It is the discovery of ancient cities such as Leeuwarden or Bosward that will leave your mark or the crossing of the picturesque streets of the small town of Bolsward.

The frieze, one of the oldest region of the Netherlands to discover by bicycle. It is a country of rivers, lakes and canals, picturesque villages and vast pastures, it also has 4 national parks!

Discover the North of the Netherlands with the Green Bicycle.

The Netherlands is THE place to practice cycling, it is also a paradise for family cyclists. Unlike France, cycling is a priority for getting around. 27% of Dutch people travel mainly by bicycle, compared to 3% in France. For a long time the public authorities have invested in cycling infrastructure, which gives an ultra-developed network. It is therefore very pleasant to cycle there, even if it is sometimes very busy. It is a privileged destination for families: secure trails, hotels designed for cycling and star circuits. In addition to your road book, there is no risk of losing yourself on the very well marked cycle paths!